Coaching to Outperform the Norm 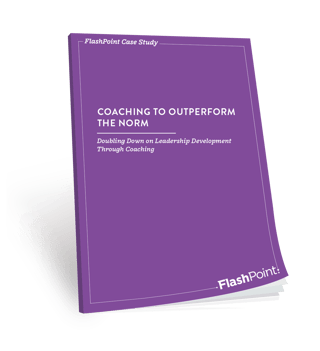 DOUBLING DOWN ON LEADER DEVELOPMENT THROUGH COACHING

Our client grew to a head-spinning degree in a very short period of time, in all the best ways. To create a firm foundation for leaders to excel and flourish through growth, Ascension Ministry Service Center (MSC) invested in coaching.

The goal was to make leaders sharply self-aware of their own leadership styles, to prevent silos in the organization through multidisciplinary teams, and spark an understanding in accountability and ownership in overall goals. The impact was so great from FlashPoint’s initial coaching engagements with the two leadership teams in 2013 and 2014, the MSC decided to mature the process even further. The next step, in 2015, was to invite four levels of leaders to participate in individual and group coaching: executive team, operations leadership team, directors, and managers. Investing in more coaching—more frequently and deeper down into the organization—has been the vehicle to reach their business goals through growth and change.

When every level of leader is performing at his or her very best, an organization is positioned to perform at its best.

MAKE THE MOST OF COACHING

The MSC is a provider of HR, supply chain, and financial services to Ascension, the nation's largest nonprofit health system. The MSC’s support is vital as Ascension strives to lower healthcare costs and improve services at more than 1,900 health service sites across the country as well as be positioned to offer services to sites outside the network.

FlashPoint designed and facilitated a coaching program customized to the organization’s unique needs and structure. The program propelled leaders to create a culture of coaching where multiple levels of leaders give and receive feedback through exercising courage and compassion.

In 2013, the MSC started with six months of coaching with two groups of leaders. In 2014 they increased their coaching engagement to area leads, and in 2015 they matured the process even further and invited four levels of leaders to participate: executive team, operations leadership team, directors, and managers.

Realizing more value in increasing the duration and depth of coaching, our client has made a long-term strategic investment with an expanded coaching plan on the horizon for 2016-17, in order to grow leaders, create a leadership pipeline, and cultivate a sustainable culture of leadership that allows this growing company to succeed.

“There's no class or course you can take that is as important as in-the-moment, real-time feedback. Learning how to give it, receive it, and act on it. As we continue to grow, we are working to build a culture of coaching where it’s common to walk down the hall and see leaders engaging in coaching up, down, and across the organization.”

Optimizing an Executive Team to Move an Organization Forward